Either as a penetration tester or incident handler, who hasn't been in the situation where third party tools were not allowed in the network and transferring files, executing commands remotely, or even sniffing data became a huge challenge?

This post will be the start of a series of posts which will narrate how understanding Python language is really useful whether if you are part of a blue or red team. As any other topic, it is always good to start from the basics and then work up to more advanced scripts. I have read several other posts about this specific topic (Client-Server Socket programming), and I always had to go back and check other references in order to understand every single line. Here, I will be providing definitions for every method or class being used in the Python code and as many details as I can in order to make it easy for you, and also develop a strong understanding of the basics of socket programming.

Described as a"Low-Level Networking Interface" by Python documentation, provides access to the BSD Socket Interface (API) which allows you to develop applications that could transfer data between processes on the same host or on separate ones over the network without writing several lines of code to deal with the many layers of networking protocols. The way how this is possible is by using system calls and Python's object-oriented style. The socket() function inside of the socket module returns a socket object whose methods implement various socket system calls.

BSD Sockets generally relies upon client-server architecture. For TCP communications, one host(server) starts listening on a specific port for incoming connection request. When a request arrives, the server host accepts the connection request, which at this point data can be transferred between the hosts (Server-Client).

Testing the Server and client 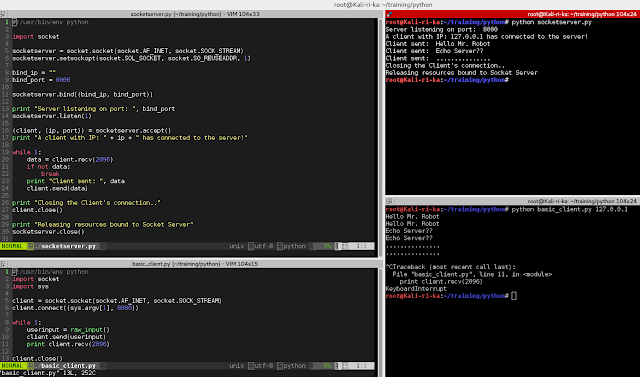 I hope you enjoyed this first simple python socket programming tutorial. This was really easy to code, but the value here was to understand how socket programming paired with python's object-oriented style works from scratch. Next time I will take this basic script to the next level so that you can see how easy and powerful python is.

Feedback is always appreciated ! Thank you !